A Pig for Pete 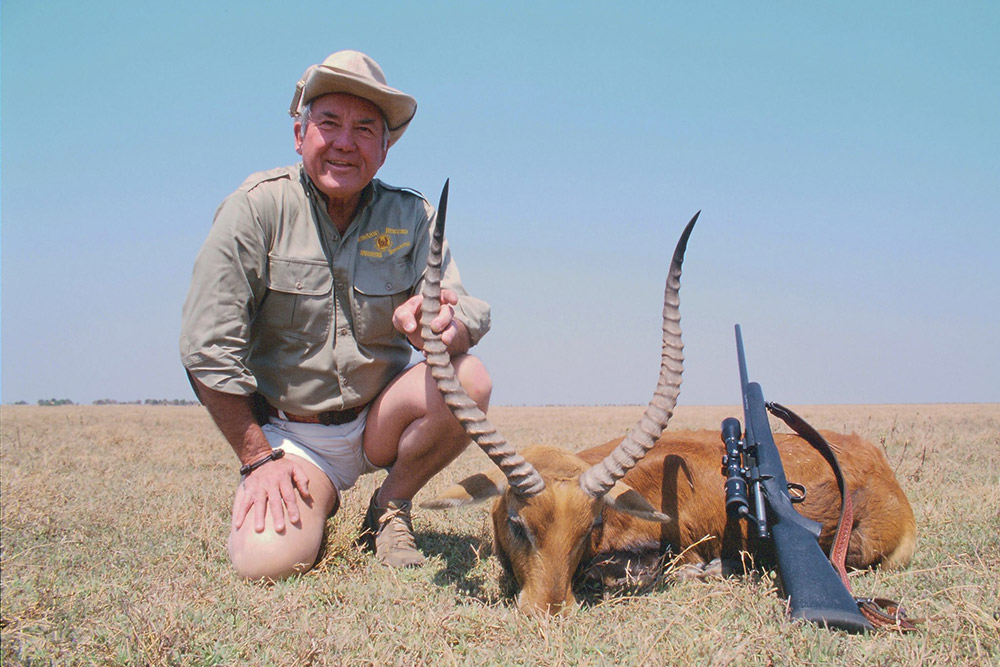 by Craig Boddington
Craig Boddington honors one of his heroes, Robert “Pete” Petersen, during a special hunt in New Mexico.
Living legends are so rare that not all of us will encounter even one. It’s probably more unusual when the legend turns out to be 100 percent genuine. Robert E. “Pete” Petersen (1926-2007) was the real deal. Mr. Petersen, as I called him, made a business and a fortune from his passions– cars, guns, and hunting. He is perhaps best known for the Petersen Automotive Museum, and for his publishing empire. Many of the magazines he launched still bear his name. It’s not as well-known that, after the final sale of Petersen Publishing Company (and within minutes of the expiration of his non-competition clause), Pete was also the owner and custodian of this time-honored title, Sports Afield, which he managed for a two-year period together with his friend and long-time right hand, Ken Elliott (1940-2019).
As his business became successful, Pete could have any firearm he wanted, and his gun collection was amazing; after his death, a large portion of it went to the NRA, with some of the highlights on display. But there was collecting, and there was hunting; in the field Pete rarely used ornate firearms from his collection, relying instead upon old friends he trusted. To celebrate the sale of his company and his seventieth birthday in 1996, Pete went on safari to Zambia, and Ken Elliott and I joined him there, together with Pete’s ranch manager, Gary Williams, and renowned wildlife artist Doug Van Howd. Pete had a .22 Hornet; he almost always took a Hornet to Africa. For larger plains game he had a .300 Jarrett. For buffalo he had his old standby, the wildcat .460 G&A by George Hoenig. Ken had a .460 G&A Short built by Jack Lott, and his .257 Weatherby.
READ FULL ARTICLE »
Next Post
Quick View